skip to main | skip to sidebar

When I heard that the Green Festival was coming to town, and that I could get a $5 discount on the $15 admission for riding my bike, along with free valet bike parking, I printed out a couple copies of my resume (just a few, trying to conserve paper), threw on my helmet and sped up Mass Ave to the Convention Center. Valet bike parking had NO signs at the main entrance, but after locking it up on the street, going inside and finding a volunteer, i got directions to go around the building, and saw a two by six foot sign at the bottom of the window between buildings. So i left my bike, waited in line, got my discount ticket and rode the escalators up to the main floor.
I was anticipating a world changing event since Obama's rise to power is imminent. A Green sea of change coming to Washington. Tons of Green companies and Green (as well as "Mint") Collar jobs, looking for bright individuals such as myself to take the reigns of a burgeoning sector and bring it to the mainstream.
What I got was a bunch of crunchy granola salespeople hawking their "Green" wares. A guy looking for people to jump aboard his "Green Amway" product line. Empowering people with green products? My Ass. It's still door-to-door sales and tupperware parties. Conning people into things they don't need that are manufactured overseas somewhere and your still a slave to the bottom line. There were at least 20 vendors selling organic dog food, all the natural fiber t-shirts you could ever want, and 17 varieties of baby clothes made out of hemp.
My optimism about real change in everyday life was squashed by the juggernaut of Capitalism. Even the organic beer and wine was $5 to sample, so I drowned my sorrows in free samples of acai juice, organic valley milk, Annie's cheese crackers and a few shots of wheatgrass. The weekend wasn't an entire bust.
I met Jim, the founder of Elysian Energy and talked about his energy audit company, and debated trying that out as a new career path. Lots of grimy work though, and I still haven't heard back from him. I also met one of the volunteers at Phoenix Bikes, a youth-at-risk bicycle shop program over in Arlington similar to Pedal Revolution in San Francisco. Talking with the guy there was enough to get me inspired to volunteer, as soon as I have a regular schedule that is. There were also some folks that were interested in changing the way we commute to work, but again, putting my name out there and not hearing anything. Other good points were getting an extra ticket for free from some radio station, and the snacks that kept me fed for free. There were also free yoga classes that would have been worth it, had they been advertised at all. I also enjoyed seeing the wrap up speech with Dr. Kevin Danaher. He's a great speaker but he embodies SF a bit much for some of the East Coasters I think.
Overall a bit of a disappointment, the commercialism was more than I could bear, but I did get some good ideas going in my head. I didn't bother to take pictures, since it looked amazingly like any other trade fair. Hoping I'll be surprised by the next big event like that I decide to attend.
Posted by Shawn at 2:21 PM 2 comments

The "50 States Ride" happened nearly a month ago, but it was a great introduction to DC, and I've been surprised that many more people don't know about it. I had been checking out the DC area bike coalitions and found WABA. The 50 States ride which ends up being about a 70 mile bike ride through DC riding on all of the state streets, covering all eight wards of DC. (Map) WABA claimed that the ride was "unsupported" meaning that there would be no vehicles, but they did offer a lunch option and promised two stations along the way to get water and refreshments. 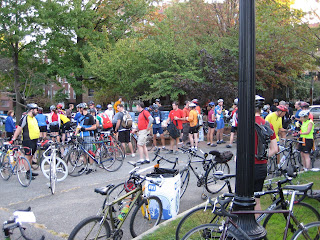 We met up at the start of the ride in Adams Morgan where they had registration, coffee, bananas, shot bloks,mini clif bars, free water bottles, and cue sheets. There was quite a crowd here, more than I expected for an "unsupported" ride. A little after 8:30am we rolled out and I was reminded of Critical Mass rides in SF, the euphoric feeling of owning the road with a group of cyclists, blocking traffic and drawing the attention of everyone on the sidewalk. Most of the bikers were really friendly and we spent the first two or three miles letting others navigate and following the pack. Once we hit Florida, the leaders of our group got a bit confused, and that's when the real ride began. 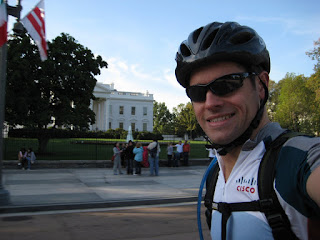 From Vermont Street on, the pack started thinning out, dropping a few more riders here and there as we passed the White House through an unmarked detour since the WTO meeting was in town and they were expecting protests on the order of the Seattle (??) riots from years gone by.

After passing through downtown, we headed past Eastern Market, a few blocks from my house, and over the bridge to Anacostia where the ride through the park was nice, but some of the neighborhoods got really depressing. We reached the halfway point for lunch at about 11:15 and were told that lunch (which we opted out of) wasn't coming until 12:30pm, so we found a few other riders that wanted to continue a left in a small pack of four. We kept up a pretty good pace and caught up with three other riders around West Virginia Ave passing Trinidad and Galludet. By the time we cam near Fort Totten and Catholic U of A, were were down to four, and a mile or two later, as we approaced Green Circle, we were at three. We managed to stick together with a guy that was head to toe spandex racing gear, but he was a really good climber, dropped us pretty bad coming up out of Rock Creek Park. 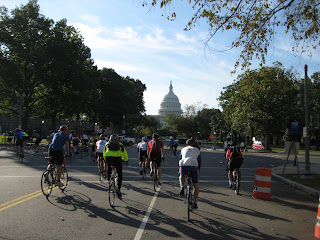 The only water stop we found was hosted by the Cycling Team of American University. They had tons of stuff for us, were taking photos and had great energy, much thanks to them for being there 12 miles before the ride was done. We screamed through the rest of the ride, ending up at the start around 2:15pm. Roughly two hours before the post ride happy hour was to begin. So we biked a bt further, downtown to get some Five Guys, and called it a day.
The ride was a great intro to the neighborhoods of DC, I'd recommend it to anyone who has ridden 30 miles or more on a bike, and if you haven't, you should at least do the 13 colonies, or break up the 50 states ride into two or three smaller chunks. I'll be going again next year, hopefully with a larger group.
Posted by Shawn at 7:12 AM 1 comments

It was almost in the 70's today, and I saw a VCR on freecycle up near Tenleytown. Instead of taking two metro lines, since I think they're both under construction, I biked up there and got in nice 14mile ride in the sun today. Here's a link to the route I took. Stopped in at 9th and E for a bagel sandwich at Brueggers in DC!

Also heading to the Green Festival this weekend... website has been pretty shoddy all day, through too many hits, or bad web design, i don't know.